Digital cameras use an electronic sensor to capture light.  This sensor is the digital replacement for film.  Sensor size plays a role in some aspects of a photograph.  For DSLR and mirrorless cameras, the most common sensor sizes are referred to as Full Frame or APS-C.  A full frame sensor is the same size as a 35mm film frame (36mm x 24mm).  APS-C sensors are typically about 2/3 of the size of a full frame sensor, which is why they are also called crop sensors.  The exact size of an APS-C sensor varies by manufacturer.  Note that digital cameras can have larger sensors, such as in medium format cameras, or smaller sensors.  In this article, the discussion will be kept to full frame and APS-C sensors.

Sensors are comprised of light-gathering pixels.  The number of pixels on the sensor gives the megapixel (1 megapixel = 1 million pixels) count for the camera.  For example, a Nikon D850 is a full frame 45 megapixel camera having 8,256 x 5,504 pixels.  The ability of a sensor to gather light is affected by both the sensor size and the pixel size.  In general, larger sensors and larger pixels each contribute to higher-quality images.  However, over time, advances in sensor technology improve so that current sensors with smaller pixels can capture light better than older sensors having larger pixels.  For the purpose of this discussion comparing full frame and APS-C sensors, we will assume that the ability of pixels to capture light will be the same for the two sensor sizes.  In this way, the primary differences between the two sensor sizes will be described without getting into the weeds on the nuances of various sensor differences. 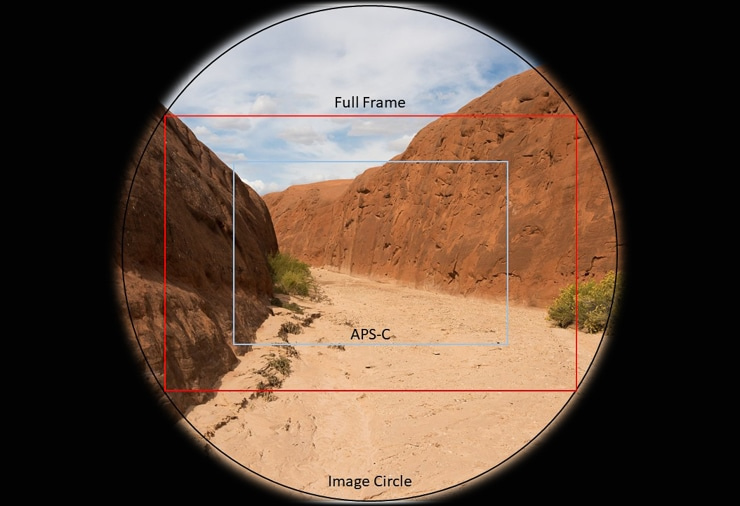 Comparison of Field of View for Full Frame and APS-C cameras.

A major factor in selecting an APS-C camera is often the smaller size and weight of the camera and lenses.  Many people look to reduce or minimize the overall bulk and weight of their photography kit.  Cameras with APS-C sensors are typically smaller than those with full frame sensors.  This size relationship holds true for both DSLR and mirrorless cameras.  APS-C sensor cameras can use a smaller image circle which means that lenses can be smaller and lighter than those made for full frame cameras.  Tripods, brackets, and other support equipment do not have to support as much weight as a full frame kit either.  Therefore, the support equipment can also be lighter.  A lighter and smaller APS-C camera kit can make an enormous difference when traveling or carrying gear around all day.

Weighing the Pros and Cons of Full Frame vs APS-C

When deciding on a camera system that is right for you, weighing the pros and cons of full frame vs. APS-C sensor cameras is one of several factors that can be considered.  The primary differences that have been focused on in this article can be summarized as follows:

APS-C (crop) sensor cameras tend to be smaller and weigh less.  They are easier to carry around all day and to pack extra lenses if needed.  Traveling with a APS-C camera kit is easier than with a full frame DSLR kit.  Because they are relatively light, tripods and ball heads can use a lower weight capacity than full frame camera systems.  While APS-C cameras do have a smaller field of view than full frame cameras, many people do not find them limiting at all.  They are fully capable of producing very high-quality images.

Full frame sensor cameras are bulkier and kits tend to be heavier.  However, they provide more flexibility in composition and more latitude for cropping.  A full frame camera makes full use of the field of view of lens, which can be important for wide-angle shooting.  In addition, the lens can get closer for macro/close-up photography and retain more of the subject in the field of view.