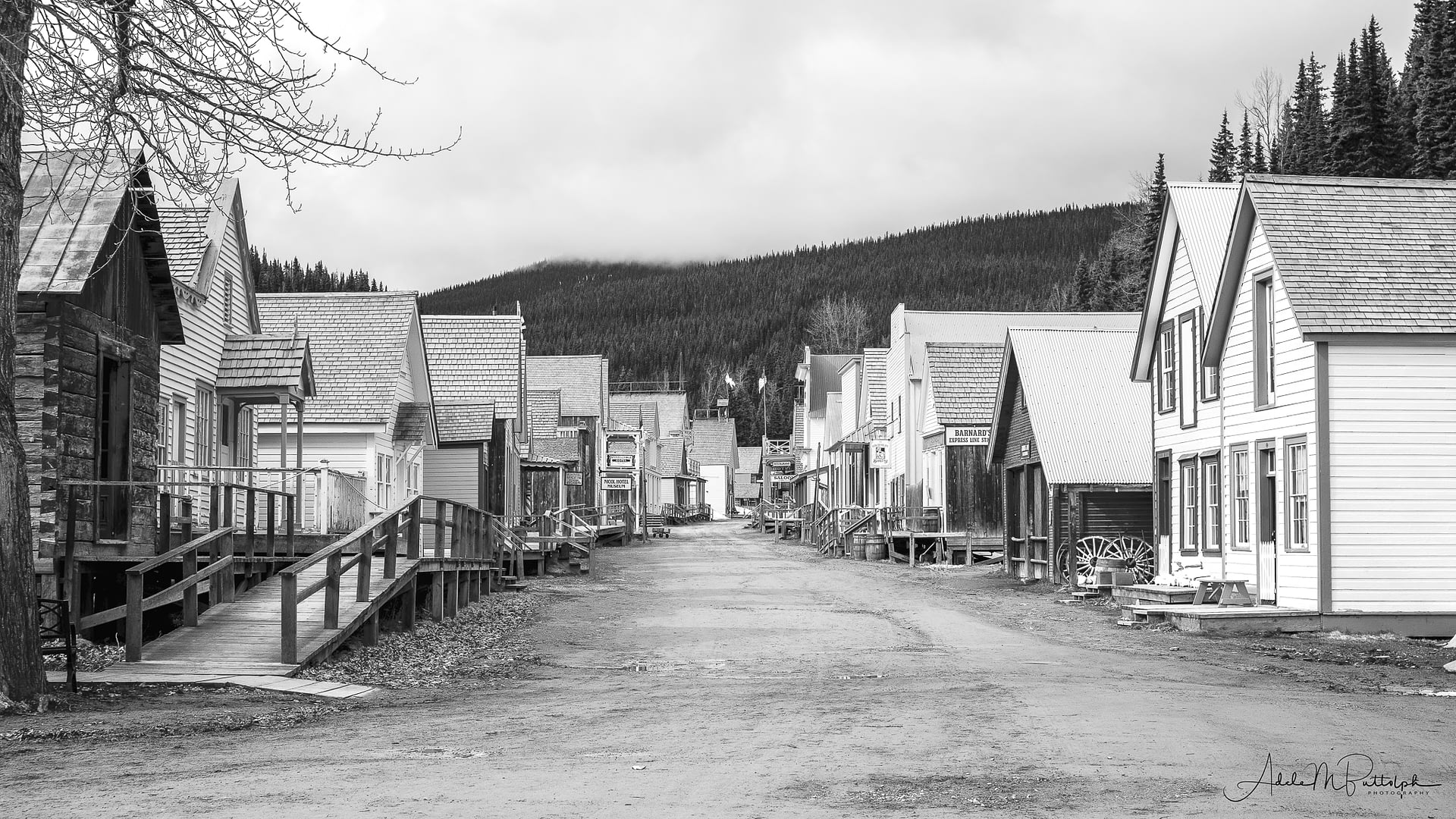 Barkerville Historic Town & Park is a history museum dedicated to preservation of the Barkerville town site and mid-1800's Cariboo Gold Rush history, documents, and artifacts. Visitors are provided with many opportunities to participate in tours of various elements of the town. These tours cover the lives of miners and prospectors, history of the Cariboo Gold Rush, Chinese immigrants, community life, and other topics. Most of the tours are led by actors portraying historical figures. They play their roles expertly, while telling the stories of this interesting location and it's people. The tour guides are instrumental in bringing the history of Barkerville to life for visitors.

William "Billy" Barker was one of several gold miners who came to the Cariboo area to prospect and mine along the rivers and streams. His story is an interesting one. A true rags-to-riches life, which then reversed. An English waterman, he went to California and mined there with little success. After hearing of gold found on the Frasier River, he made his way to the Cariboo area. His experience and knowledge paved the way for finding gold deposits in this new frontier.

His first attempts were not successful, but after a time, he struck it rich. A 52-foot deep shaft was made and he "struck the lead." This claim yielded one of the largest finds of gold in the area. Barker continued his work with other claims. His successful claims yielded enormous amounts of gold. He and his wife lived richly on his wealth. Over time, the big strikes played out, some poor investments were made, and an extravagant lifestyle ate away at his wealth. Mr. Barker spent his elder years destitute. His legacy is preserved as the town of Barkerville.

When gold was discovered on the Fraser River, there was little to support the enormous influx of gold miners to the area. As the number of miners grew, they required provisions, packers, and towns. Towns were developed in the Cariboo goldfields region. They provided the necessities of life, the means to acquire goods, entertainment, and community support.

Miners and others came to the Cariboo goldfields area from all over the world. Many arrived from Europe looking for work during the hard times of the Industrial Revolution. Most of the people who arrived in Barkerville and other nearby towns were men. Very few could afford to bring their families with them.

There were also a large number of Chinese people, mostly men, who immigrated to the area. Like the Europeans, they were attempting to escape a life of poverty and sought to improve their situation.

Barkerville developed into a town that fulfilled the needs of the local community. Starting out as a mining camp, it grew into a town. In addition to the prospectors and miners, the town grew to include merchants, craftsmen, services (such as grooming and medical), saloons and gambling halls, and even a newspaper office.

Tour guides at Barkerville relay stories of various individuals and groups. Some of these include a drunken lawyer who fell into a flume and died, hurdy-gurdy girls, prominent members of the community, secret societies, a desperate case involving cannibalism, and many others.

Visitors enter from the Visitor's Center on the north end of the townsite. This end of town through the central portion contain buildings occupied primarily by Europeans and those of European descent. Chinatown comprises the southern end of Barkerville and is entered through a gateway.

Many of the historic buildings contain exhibits that retain the historical context and content of the original purpose. Others, such as the blacksmith workshop, also actively demonstrate trades as performed in the 1800's.

Visitors can also enjoy modernized elements of the town such as restaurants, bakery, mercantile, Chinese goods store, and a gift shop.

A few selected images are shown here that represent slices of life in Barkerville during the 1800's. I found that photographing in Chinatown was particularly interesting.

To find out more about the history of Barkerville and the Cariboo Gold Rush, the book Barkerville and the Cariboo Goldfields by Richard Thomas Wright is recommended. The book details the history as well as the lives of people who were integral to the gold rush area. Several interesting stories are included that reveal the difficulties of life in the 1800's. These include the harsh environment of the Cariboo region, prospecting gold, cost of living, and dealing with people.

Barkerville offers a wealth of photographic opportunities. During the time that I visited, the weather was overcast, cool, and rained a little. Light was generally soft, which made for nice images during the daylight hours, particularly when shooting inside buildings by window light.

For shots that do not involve working around many people, arrive at the Visitor's Center when it opens first thing in the morning. Admission tickets are good for two days, which gives some flexibility and planning of photos.

Many of my images were shot from a low vantage point. Many of the exhibits have a wire mesh that is about 3.5 feet high to keep people at a distance. The mesh opening is rectangular and the width of the opening is about 2 inches. The width constrains the physical size of a lens that can be used without getting part of the mesh wire in the photograph. Therefore, for shooting exhibits from a low angle, it is recommended that you use a small-sized lens.

Nice article. Barkerville sounds like an interesting place to visit. Their history sounds similar to the history of much of the American West. I love the photos too. Thank you for sharing!

Thank you, Lori. It is indeed a very interesting place to visit. They really have done a nice job of preservation and setting things up for visitors.