Story Behind the Image  /  Travel & Locations 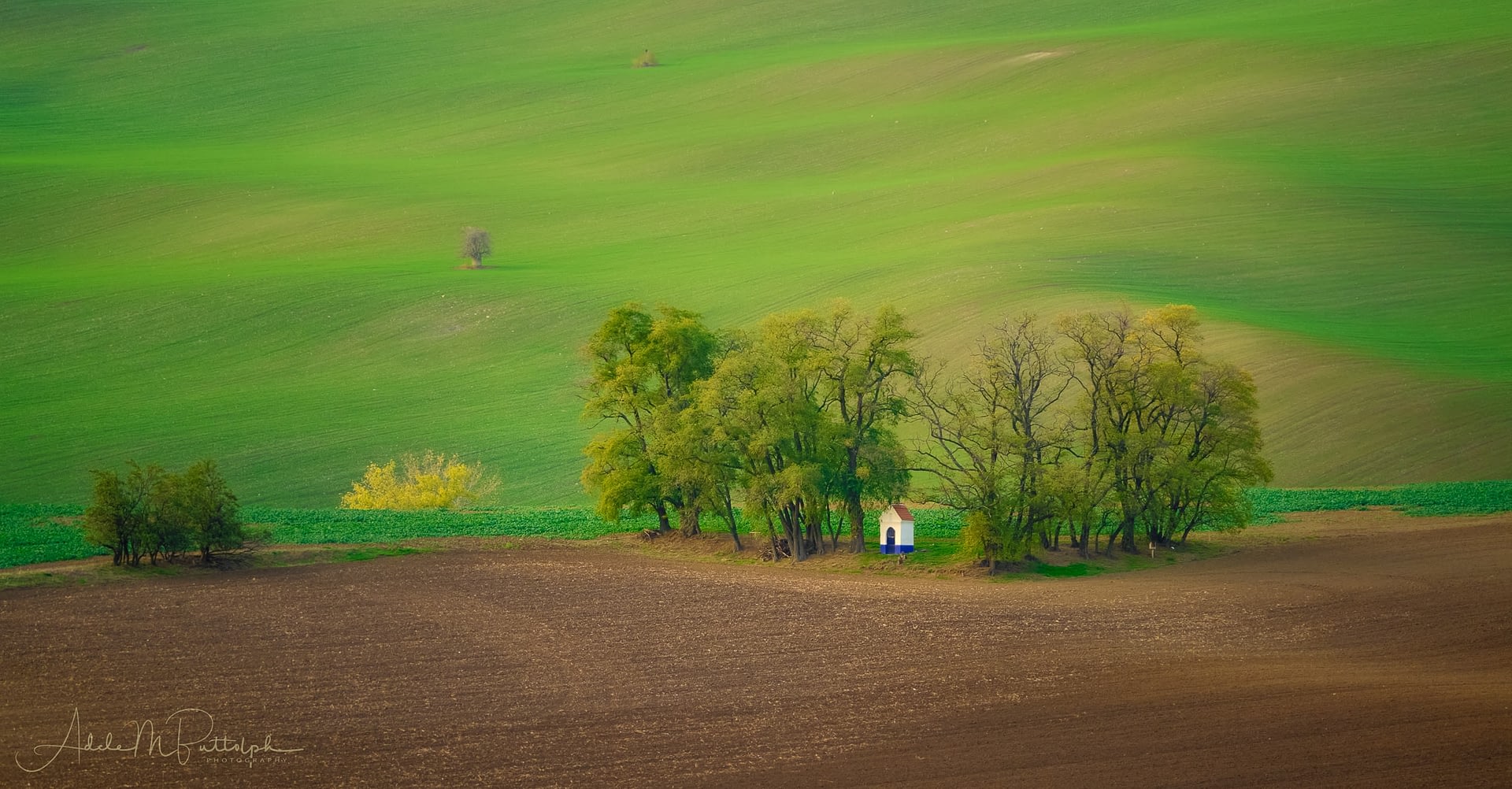 The tiny Saint Barbara Chapel is one of the iconic locations for photographers who visit Moravia, Czech Republic. Set within a small copse of trees surrounded by undulating agricultural fields, the white and blue chapel reminds us of a bygone era. A time of simpler ways.

Having the opportunity to shoot this type of scene is incredibly satisfying for travel and landscape photographers. It not only allows for beautiful photography, but for experiencing a region and way of life.

The Photographic Experience in Brief

During October 2019, I participated in a photo tour of the Czech Republic operated by Inscape Photo Tours. As part of this excellent tour, we spent a couple of days in Moravia shooting the wonderful landscape. Moravia is an agricultural region known for its vineyards and for its scenic fields. Taking back roads through the countryside provided wonderful opportunities for photography. An added benefit was having these places almost all to ourselves. We only saw one or two other small groups of photographers.

Saint Barbara Chapel was one of several locations targeted for the tour. As we traveled through the area, we saw a few other little chapels scattered throughout the landscape. Each of them had it's own charm and interest. What sets Saint Barbara Chapel apart is its position in a small grove of trees surrounded by undulating fields. The idyllic setting provides for an overall meditative and peaceful scene.

Our first attempt to photograph Saint Barbara Chapel was under less than optimal conditions. A heavy haze was present making the scene flat and dull. We returned the following day during the late afternoon and conditions had improved significantly. Light fell nicely onto the little chapel. Waves within the landscape behind the chapel were subtly highlighted by the sun. We were grateful for the opportunity to return to the chapel and to capture one of the iconic shots of Moravia.

The landscape in Moravia is best photographed with a telephoto lens in the moderate to long range. Saint Barbara Chapel is shot from a road in which the photographer is at quite a distance from the chapel and looking down. The image featured here was shot at 196mm on a Fujifilm X-H1 camera, which has an APS-C sensor (full frame equivalent of about 294mm). The image was also cropped primarily along the top.

Saint Barbara Chapel is best photographed in the late afternoon or evening when the sun angle is low and from the west. Timing for best light obviously depends on the season.

The tour of the Czech Republic was unforgettable. It covered much of the country ranging from beautiful Prague, to Moravia, central Czechia, small villages and towns, and Bohemian-Saxon Switzerland. Images from this tour can be found in my gallery Czech Republic.

The featured photo in this post was shot with a Fujifilm X-H1 digital camera and a Fujifilm XF 50-140mm f/2.8 R LM OIS WR lens.

Thanks so much, Jamuna! I appreciate it!

Absolutely beautiful!!! It is like a painting! A perfect example of the beauty of simplicity and a pleasurable bucolic image.